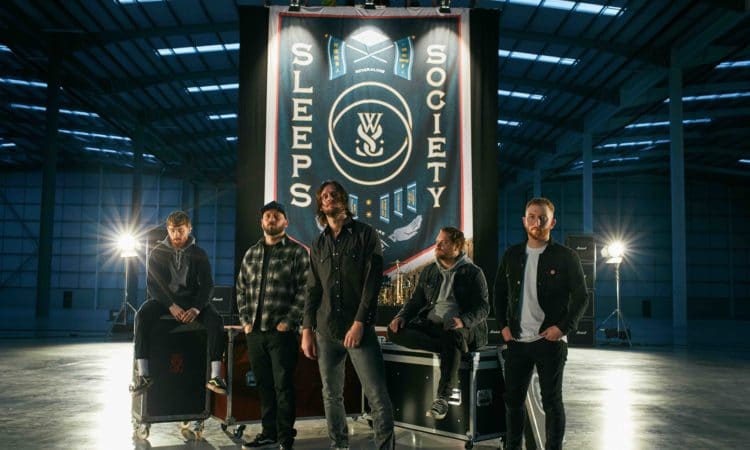 Welcome to the Sleeps Society! On the occasion of the release of their fifth album, we had the pleasure to talk to Mat Welsh, guitarist of the English band While She Sleeps. The opportunity to discover how the band managed to get out of a complicated period, notably through the launch of their “SLEEPS SOCIETY”: a platform where fans can, in exchange of a financial participation of their choice, take an ever greater part in the life of the band. Because While She Sleeps has always worked to help as many people as possible. And it is this fight that leads them today to release “SLEEPS SOCIETY”.

Hi Mat! How are you doing?

Mat: Pretty good actually! I just got back from our warehouse, we’re doing some restoration work! (ed. showing his hands covered with painting)

Is it hard for you to find the motivation to do things while you’re stuck at home?

Mat: Not at all. We spend so much time away usually and I’m always thinking: “God, I wish we had more time at home”. We are a pretty productive band at home because we have the warehouse space. So we’re always working on new projects and stuffs. I know that for other bands it’s usually the other way around. When we are on tour, we can only do shows. But at home we ride, we renovate. So last year I just thought: “let’s take advantage of that situation” and we felt that the studio space was a bit tired. So, as soon as we finished the new record, we decided to fresh it up a bit. We wanted to make the studio an enjoyabe space again.

How do you improve what’s already great

Mat: (laughs) The warehouse was built six years ago with things stolen from several places. Now we are in a position where we can build new things with better material. And we want to make it an inspiring place to make another album. It’s always been an exciting place to go. When we go to it, we are like: “what do we do? Do we make music? Do we make art?”. But it’s also a very difficult place to take care of.

You guys let fans came to the warehouse for several special occasions those last six years. Do you receive unannounced visits on “normal” days?

Mat: Yes of course, simply because the address is public. People just turned up to say hello. We also receive a lot of stuffs in the mail. There is a coffee shop next door and sometimes we see obvious “band people” with our shirts on them. And I’m always covered in pain because I don’t look as the typical musician. And people are like: ” Oh shit, that’s him!”

Six years ago, Loz explained to us that you, as a band, you are not considering yourselves above the rest and that your work is to tell people that we have to make the best of the situation together. We feel like this new album, and the whole concept of the “SLEEPS SOCIETY” is the perfect continuation of what you said six years ago.

Mat: Thanks man, that’s a great compliment. I feel like what we started (“SLEEPS SOCIETY”) last year is just the summation of everything that we did as a band. When we did “This Is The Six” (2012) we wanted to say: “this is us, the band, with the fans and we are six”. “SLEEPS SOCIETY” is, for me, building a house for all of those ideas. We were working towards it. We were working on making this community that people can join and be part of. “SLEEPS SOCIETY” is not just this record, it’s the rest of our career.

We liked the fact that you said from the beginning that starting the “SLEEPS SOCIETY” concept was also to earn money from your art.

Mat: Yeah, thank you man, it’s nice to hear that. I’ve always been really conscious that bands are often dressed with a facade that covers who they are, and people are thinking that those people should be living in big houses or living like big rockstars. To me, it doesn’t exist anymore. Maybe it did in the fucking 80’s ou 70’s. But now it’s over. You can record an album in your bedroom, you can upload it on Spotify and become an overnight success. That doesn’t mean that you’re going to be rich. One thing does not translate to another. I’ve always been up to explain the reality of it to people. We don’t make a fortune, we just make enough to survive. We like to explain to people that streaming numbers doesn’t translate into an amount of money that you can split into a group of five people and live a normal life. We are in our thirties and I believe that we should be able to live a normal life giving the amount we work, and how hard we work. I’m happy to taking off that veil that people might have on musicians. I think the more the people will do that, the more the people won’t get into it for wrong reasons. There is a lot of people that think that by becoming musician they’re going into some kind of stardom and success but it’s like any job: it takes hard work. And if we explain that yeah, we probably make less money that if we were working to the fucking supermarket, then that’s fine. It’s also a way to say to the sixteen’s years old me that you can do something like that, and it could work. If you are passionate about something, it might take maybe ten years before getting sustainable. And if you just say that to people, but don’t show them other ways to make it, it creates a domino effect that result in the end of that beautiful sub-culture that we know today. And bands that make heavy rock music will disappear. It won’t be five dudes playing music together in a room, but just one guy creating music on his laptop, alone in his room.

Let’s talk about this new album “SLEEPS SOCIETY“. The recording sessions were more positive than the “SO WHAT?” (2019) sessions, right?

Mat: (laughs) Yeah! I love “SO WHAT” but man, this record almost killed us. When you listen to it, you can feel the amount of shit we went through during the recording process. “SLEEPS SOCIETY” is really a record where we are back on where we were on “You Are We” (2017). We felt really empowered. We are close to each other on this record. I think it’s because we were so excited about what we were starting (“SLEEPS SOCIETY”). It was between fear and excitement but I really think now that it’s our best record.

We felt like on this record is you talking to your fans in a very straight way. You even thank them on the last song of the album.

Mat: When I was young, I took the bus to the city to buy my favourite records and on the travel back, I was listening to the album while reading the lyrics and reading the thanks. And it was the closest I could get to my favourite bands. But now, the sales percentage of physical sales to streaming is so different that we felt like we were missing this conversation with our fans. Instead of writing this in the booklet, why don’t we just say it? It feels nice. It was quite a weird thing to do. I recorded mine, alone in my garage, just one night. (laughs) I just did it once.

This new album sounds really fresh. We felt it is more personal than political.

Mat: It’s true yes. That’s potentially because we learned so much by doing “SO WHAT?”. It felt like it was the right time to talk about that. Sean spends a lot of time at talking about mental health, the weight of anxiety and stuff like that. If we are lucky enough to do this a growing audience, we must say things that will help people. We understand now that we have that opportunity to help people. People are always talking to us about songs we already released that helped them. We can be the difference between someone having a shitty day, and someone that will fell okay not to be okay. If you think that it’s gonna help to say it, then just say it.

Deryck Whibley from Sum 41 is on the record. After Sam (Architects) doing a song with Good Charlotte, Amy Lee (Evanescence) doing a song with Bring Me The Horizon, it’s like every young bands is trying to play with their teenage idols!

Mat: (laughs) Yes I didn’t see it like that but you’re right. We were huge Sum 41 fans when we were kids obviously. At the beginning of the recording process, someone told us that Deryck was fan of our band. And we were like: “What ?! Did he really knows the band?!”. So we went on a hunt to catch his contact. And as soon as we managed to write to him, he told us that he was really excited about doing something with us. And he did something amazing. We feel like both Simon (Neil, Biffy Clyro) and Deryck’s collaborations are not just one spot on the song but real songs we did together, a bit like with a new member of our band.

To conclude, as our website is called “RockUrLife”, what rocks your life Mat?

Mat: My partner Nat, my dog Nelson, all of my brothers in While She Sleeps and our amazing fans. What’s rocking my life now is finding the positive in all this negative world situation. I enjoy having the opportunity to have this conversation with you because we don’t really get the chance to talk to people so I’m glad we could spend this time together. 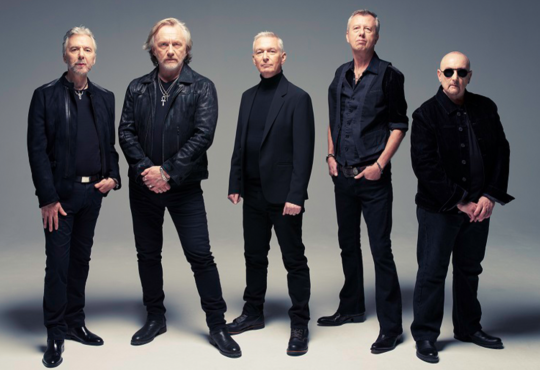 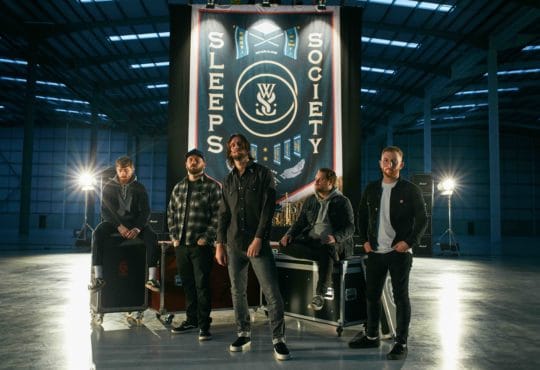