Two months before the release of their newest album “Hydrograd”, Corey Taylor and Josh Rand welcome us in Paris to speak about the making of the record.

Your new album “Hydrograd” is coming in less than two months as we speak, we guess you can’t wait.

Corey Taylor (vocals): We’re very excited. You guys think you’re excited but we’ve been sitting on this for four or five months by now, so we’re ecstatic, we can’t wait for people to hear it.

Corey: You can’t say that for every answer Josh! (laughs)

How’s been the feedback so far?

Josh: Extremely positive, which is awesome. We’ve been away for a while, it’s been four years since the last record. So to have that kind of feedback after so long is great. 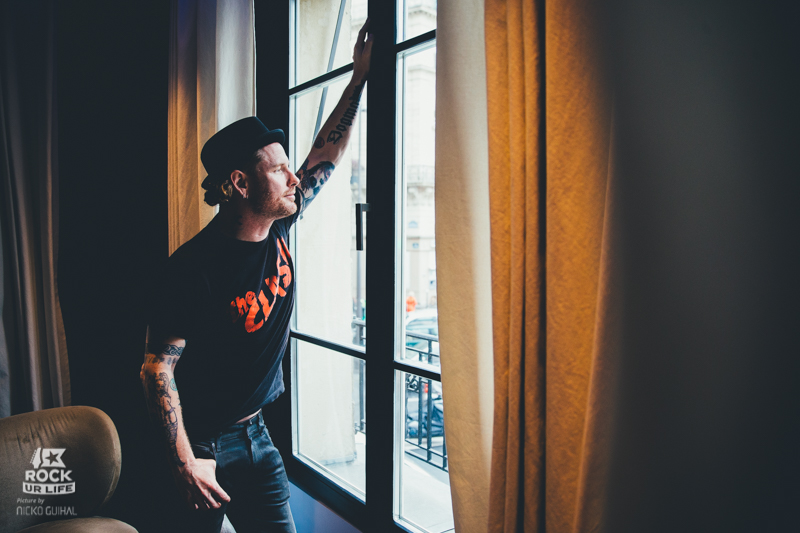 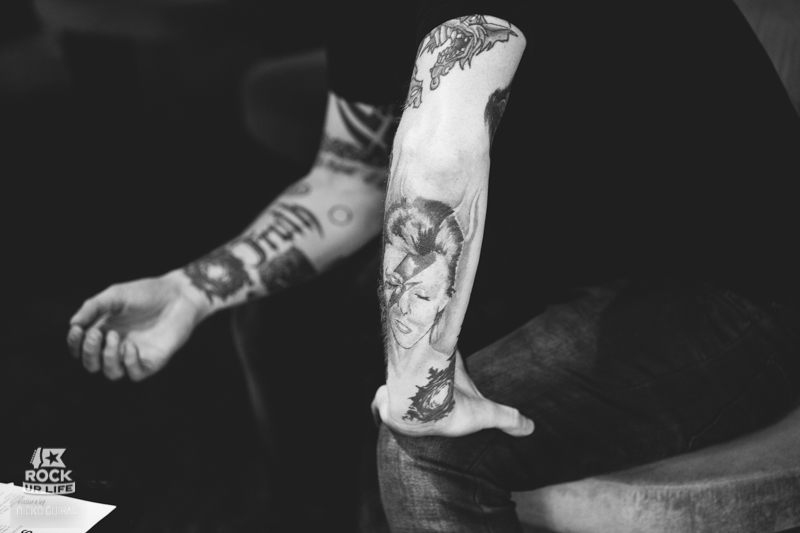 Since you’ve been away this long, do you think the fans look forward to it more than usual?

Corey: Maybe. The thing you always hope is that the audience is there when you put something out, especially when you wait so long between albums. I think we were able to re-engage the fans by keeping them in touch, keeping them involved during the recording process, we were posting things every day. But not too much, you don’t want to overdo it, just to grab the attention. And I think in a lot of ways we were able to whet the appetites of the closest fans, and then that kinda spread like wildfire. To the point where when “Fabuless” and “Song #3” came out, it was perfect timing, and people were more excited that we thought. Which is a good problem to have. (laughs)

Speaking about those two tracks, why did you pick them as first singles to put out?

Josh: The record is very diverse, we’re a very diverse band. And we’ve always put out like two songs that showed the spectrum of the record, we’ve done that in the past with “Get Inside” and “Bother”, “30/30-150” and “Through Glass” and so on. So I guess we just felt, with the team that surrounds us, that these two songs were the best choice. 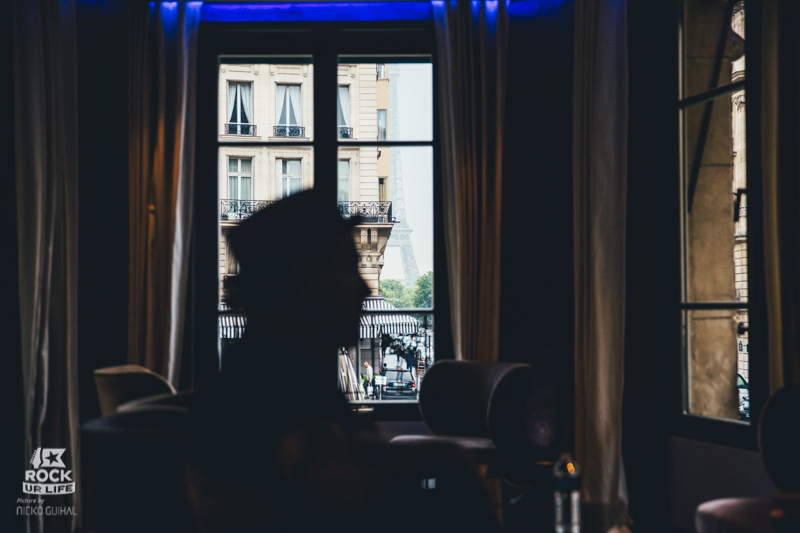 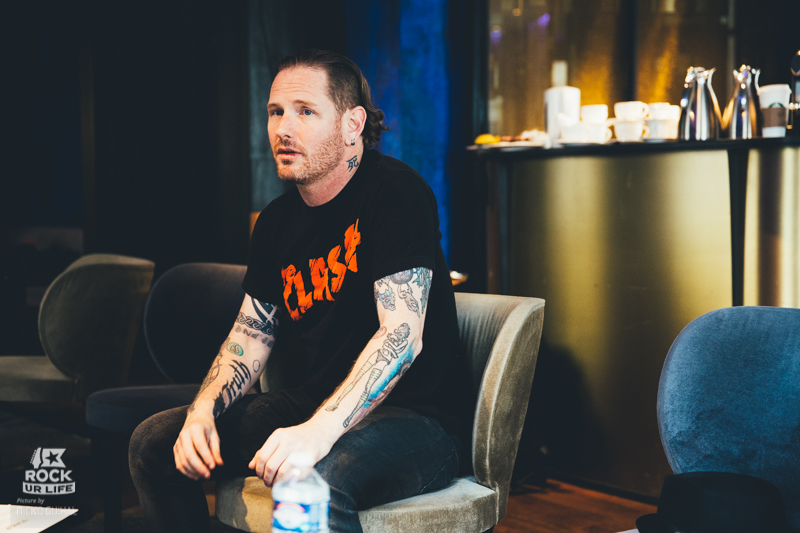 Back to the recording process: how did it go this time? Did you work differently from the previous records?

Corey: Our approach was, honestly, very different than the way we used to do it. We decided to go for live recording, and trying to really get a great rhythm live. And when it came to recording new music, we were doing it in little breaks, trying to focus on five songs at a time really. Getting the ones that we reacted to, that responded to us. And we’d take those five songs and practice them as a band, trying to get a cool live vibe to it to begin with.

Josh: It was about really trying to capture a moment, instead of perfection. Sometimes perfection is being imperfect.

Corey: Yeah. We were able to capture a certain energy, by letting the songs becoming what they could be. It was pretty fantastic.

We guess that’s the kind of energy you want to push even further on stage.

Corey: Exactly. And I’ve always felt like we’ve never been able to really capture that, to capture us as a live band in the studio. We’ve always been live a very different band than we are on record. I feel like this is the first time we were really able to marry those two. That’s exciting.

Did you plan anything for the live scenography then?

Corey: We have certain cool things that we want to try and do, but for the most part we’re just gonna focus on making a really great live set. Little cool things here and there, little accents you can do live with the production, but for the most part we’re gonna do it old school, the way bands, all the way from Zeppelin to Rage have done. It’s all excitement, and we just turn this into a big party basically. 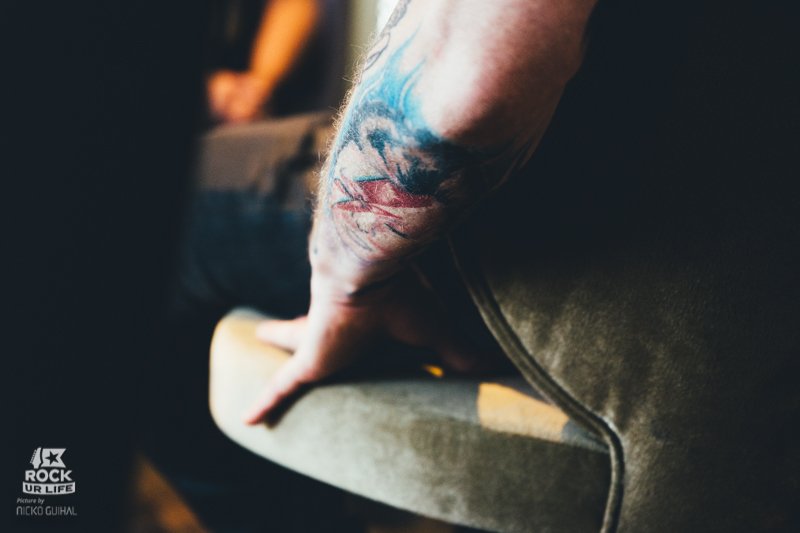 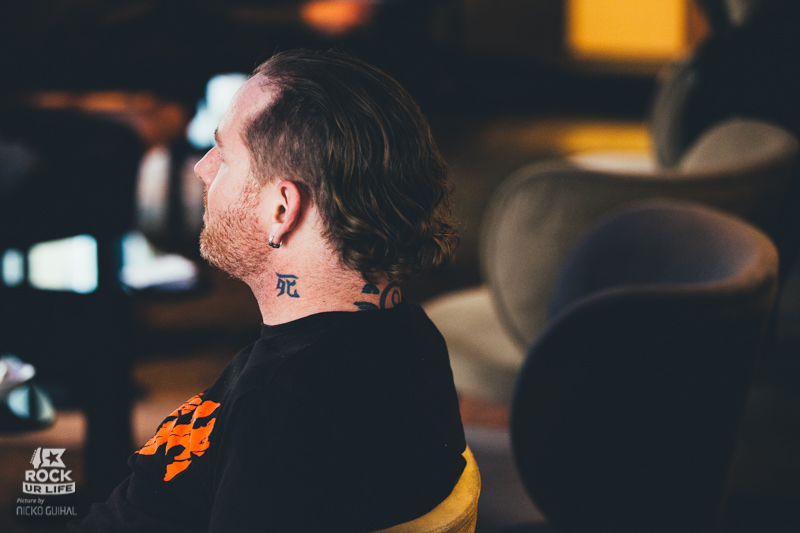 This new approach you have, did you intend to work like this, or did it just happen along the way?

Josh: It kind of happened along the way. We would kick around that idea for a while. But there was definitely a discussion at some point.

Josh: I think the EP gave us confidence that we could actually do a record like that. They were proof that we could record live. But overall it was just us I guess being sick with the process that is just the norm now, going in and recording individually. The more and more we thought about it the more and more we just played together, and it made sense for what we wanted to achieve. 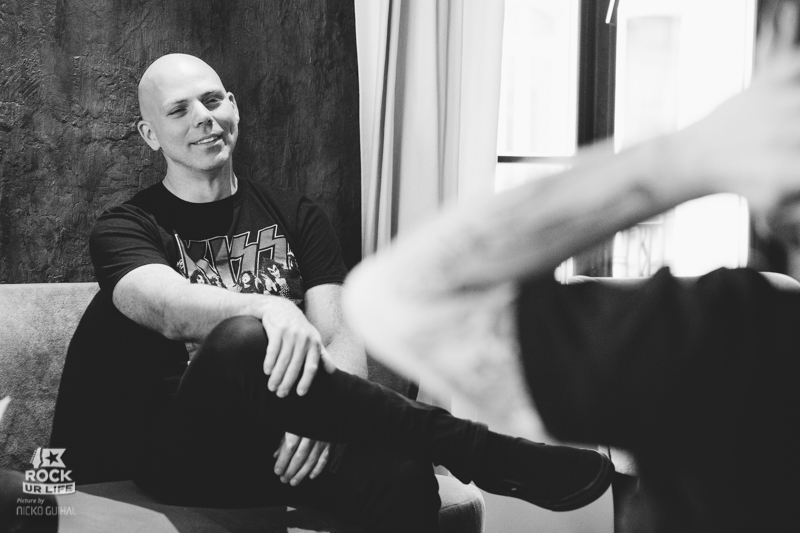 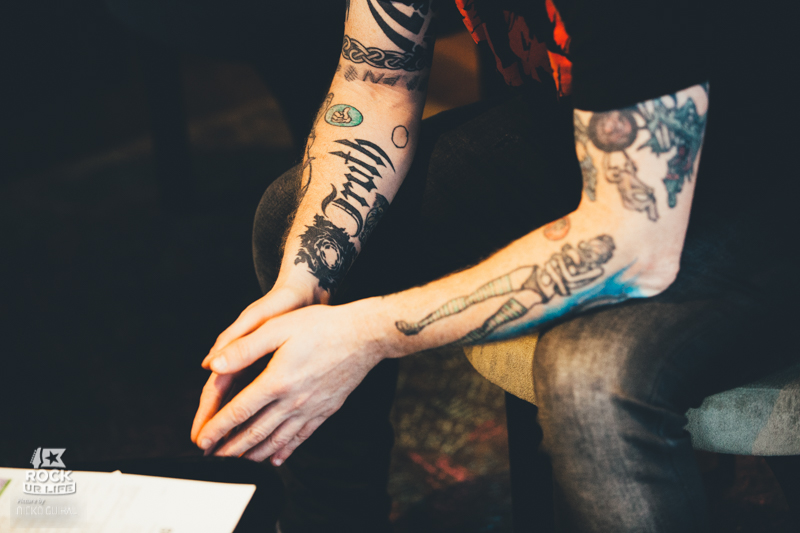 The record is very diverse, yet very coherent, you can definitely feel one type of energy through it. Do you think that’s precisely because of this new process?

Corey: Absolutely yeah. And maybe that’s also the reason why it doesn’t come out as diverse as the other records at first. But then you go back and go like “oh fuck that’s different”. (laughs) This live energy gives us a straight line of consistency. Even in songs that are very different like “Taipei Person/Allah Tea” and “Mercy”. Very different styles and yet same attack, same consistency, same big music, big rock. Which a lot of people are afraid to say these days but screw that, we’re a fucking rock band dude. I think in a lot of ways, recording live helped us capitalize on the fact that we’re such a diverse band, and make it sound like the same band. Maybe for the first time.

Corey: Yeah, you know because in albums we’ve done in the past, there’s like different energies going in, also because of the way we were working at that time. And with this we were so fucking ahead of schedule, we were able to really go back and accentuate instead of filling the blanks because you’re running out of time. It was more about adding ear candy because we wanted to. Because we were coming with ideas instead of trying to force something. And I think because of that, because the foundation was the same, it really allowed us to play around with the style and do it in a way that didn’t feel forced.

Josh Rand: It was like we were just jamming. Like we were just on rehearsal. It was really quick and painless. Nobody didn’t want to be there. There was no obstacle. I mean we didn’t even have a gear problem. The only thing is that I blew up one amplifier, and literally it was swiped out in five minutes.

Corey: Everything just felt effortless. We laughed every day. We basically set fire to the notion that you have to be miserable to make a great album. We were like “screw that”! That’s so fucking stupid. We were happy, we were there early, we left late. And we genuinely enjoy everyone’s company, we just had so much fucking fun doing it. Honestly, by the time we were leaving, we didn’t want to. We were like “no, let’s just write another ten songs”. It was probably the most enjoyable experience we’ve ever had. 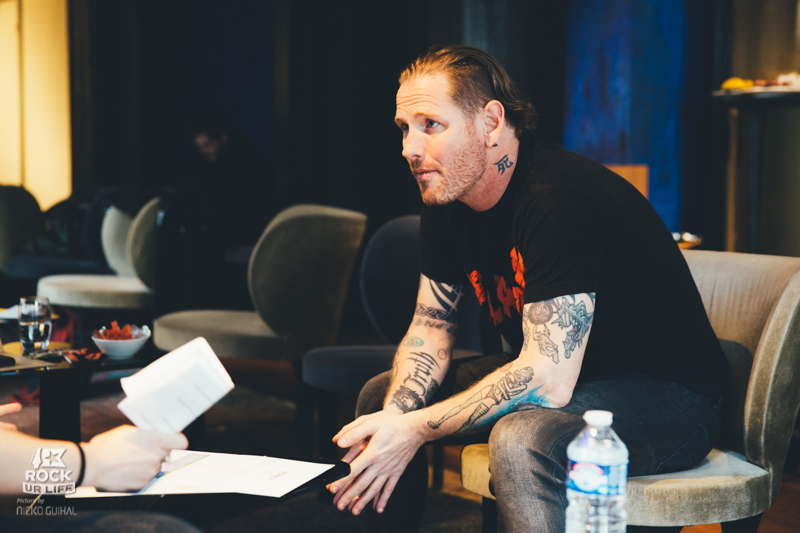 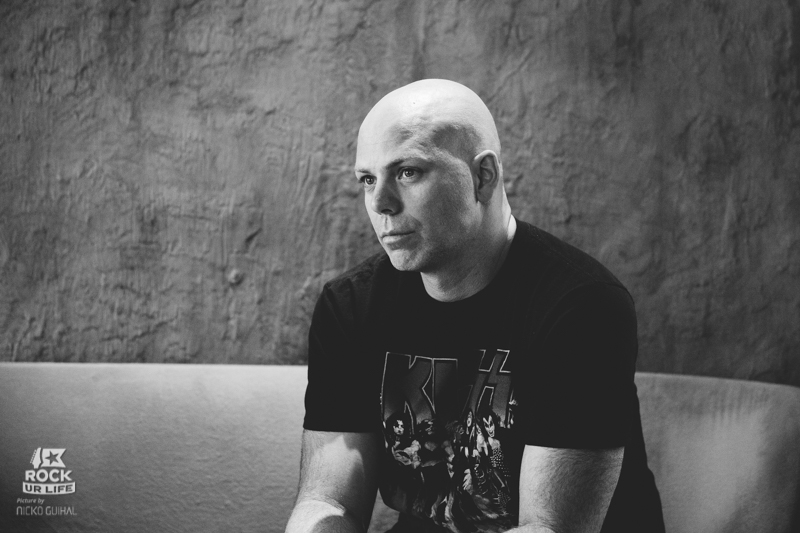 One last question before we end: since our media is called “RockUrLife”, what rocks your life?

Corey: (he thinks for a while) I’ll keep it clean. (laughs) My family. My family rocks my life. And that means everything from my actual family to (he points at Josh) this fucker, and everybody I get to work with and make music with. That rocks my life. Just for the fact that I’d be a totally different person without that. 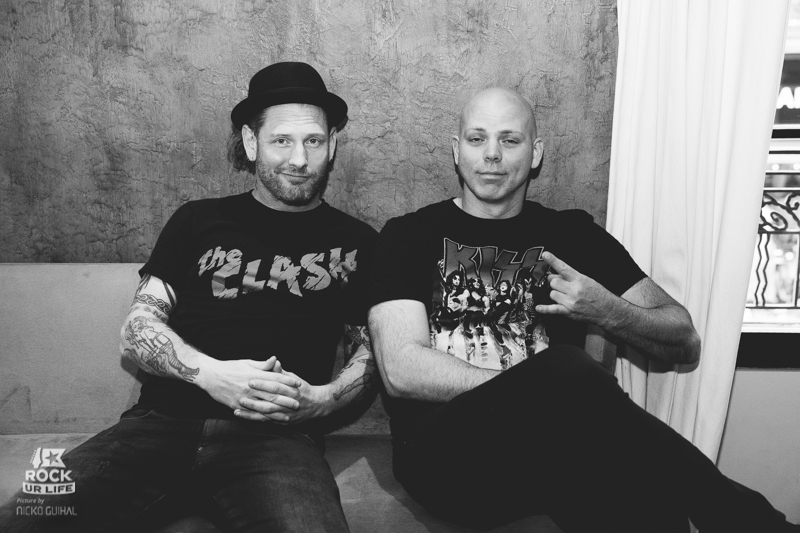 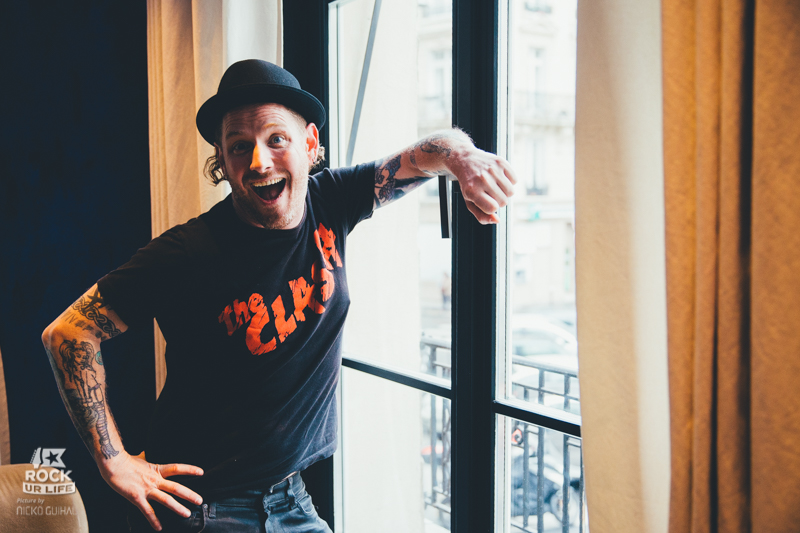 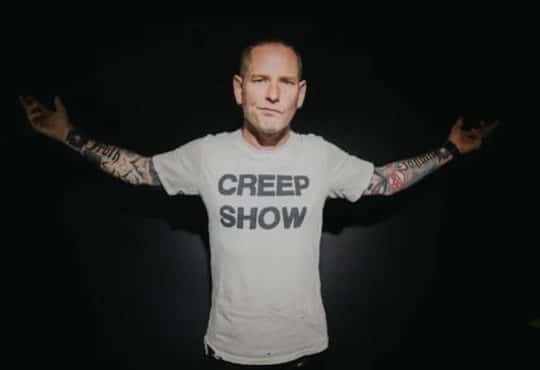 Corey Taylor : vidéo paroles de “Everybody Dies On My Birthday” ! 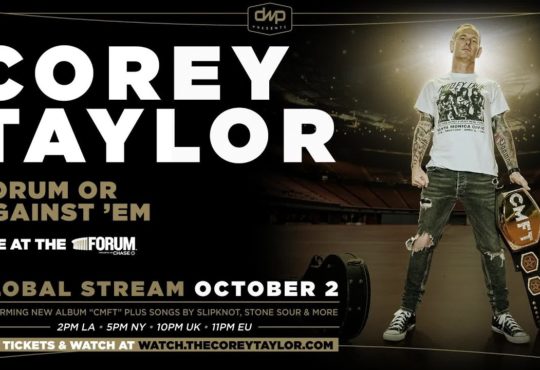 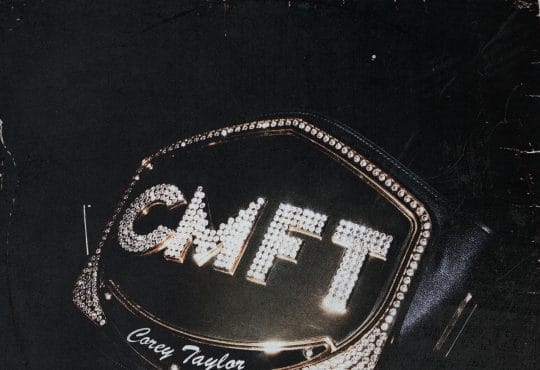 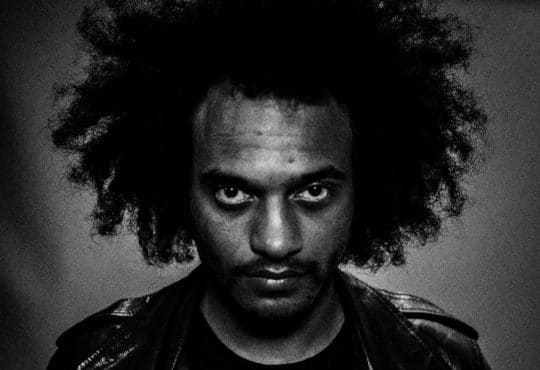