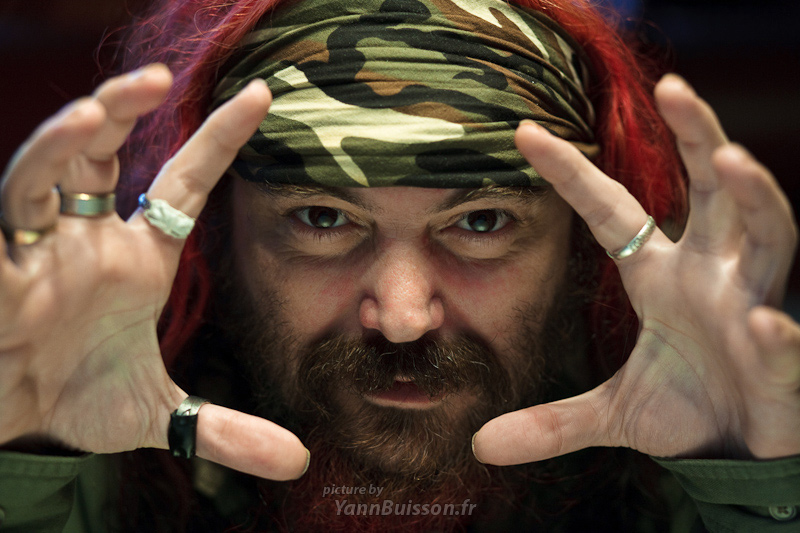 A few hours before Soulfly’s gig in Paris, RockYourLife! got the chance to meet legendary frontman Max Cavalera in his tourbus. Check this out!

Hi Max, glad to see you back in Paris. How is the tour so far?

Max Cavalera (vocals/guitar) : Great. We already did two French shows, Cognac and Toulouse. They were amazing as always, crowds were great and packed, full of energy, real fanatic Soulfly fans with tattoos and flags: all the great stuff.

Your new album “Enslaved” came out at the beginning of the year. Several months after, how do you feel about it?

M : It was a good strong record. It’s extreme; I wasn’t sure about the expectations because it’s a very extreme album, almost death metal, very brutal for some people to understand. But I think most of the fans really like it, because it wasn’t the same thing, I showed them something different with my music, after 15 years, 8 albums, it was quite difficult to do but I managed to do that, so I think they appreciate it.

It seems like you already had this project in mind for years, where was it all this time? Why wasn’t it recorded before?

M : I was waiting for the right time. It didn’t fell the right time yet so I did the others records like “Prophecy” (2004) and “Dark Ages” (2005), “Conquer” (2008), “Omen” (2010). So when it came time to do this one, I remembered I had this slavery idea, which started on the first Soulfly, 15 years ago, making a slavery record, so I decided to do it now. This album is perfect because it’s the combination of extreme music, real brutal music, and slavery goes great together.

So the record is kind of a concept around slavery. Why this subject? How did the idea come out?

M : It came out 15 years ago, as I told you, during the first record. I sing a lot about Brazilian slaves called “Zumbi” and reading about slavery. The years went by, you always look at the news, talking about slavery, factories in Mexico, South-East Asia using little kids, kind of hidden slavery that’s around the world, I thought it’d be a great topic for the album. It’s very unusual; no minimal bands had touched this topic that’s why I felt attracted to it. It was different to anything I have done so I felt very attracted to the whole project.

With both Soulfly and Cavalera Conspiracy, when you are writing new songs, how do you define which one will fit more for one of the bands? Isn’t it hard sometimes?

M : Pretty much about the vibe of the song, the riff. Sometimes the way of the riff is with a drum that I can tell is better for Igor or for Soulfly. Of course, I do a lot of writing when it’s near the album, so if I have to be in the studio for a month, the month before I do heavily writing just for the record. For “Enslaved”, one month before I wrote every day just for it.

The line up has changed this past year, can you introduce us quickly Tony Campos (bass) and David Kinkade (drums)?

M : Yeah, great players. I think they brought a lot of cool stuff to Soulfly. Tony is an experienced bass player, amazing bass player, he played with Ministry, Prong, and Possessed, he brings a lot of that experience. He’s great live, lot of energy live, lot of fire and Soufly needed that. David is an extreme drummer, more from the death metal school, black metal too. He comes from Borknagar. I love how he does his double bass, it’s great, I don’t know how he does it, he’s amazing, it hurts me feet just thinking about it. I used that a lot on the album, so that’s great.

Talking about band members, you worked with Joe Duplantier, on the “Inflikted” album, with Cavalera Conspiracy. Have you listen to Gojira’s new record, “L’Enfant Sauvage”? What’s your opinion on it?

M : It’s great. I love the record. I love the Gojira stuff, I think they keep the riffing which is very original with them and I really like it like all of their records. I think the new one is exceptional.

Would you consider any featuring with them, if that happens one day?

M : Yeah of course, we’re good friends, I like their stuff. It was fun having Joe on Cavalera, he’s a great guy in studio, we had a lot of fun with him, he did a great job on that record. I think we’ll definitely work together in the future.

Talking about featuring, “Enslaved” contains Dez Fafara’s, Travis Ryan’s and also family contributions, how was it like, working with each one of them?

M : It’s was great. Dez is an old friend, since the Coal Chamber days, I always wanted to work with him, I love his work with DevilDriver, which is a great band, it was really fun doing “Redemption Of Man By God” song with him, because it’s on a religious topic. His dad was a minister; I never knew that, so he had a lot of cool lyrical ideas for the song. Travis was different, I didn’t really have the chance to work with him, I sent him the song to San Diego, with all the open parts where he’ll sing, but I’m a big Cattle Decapitation fan. I love his old school death metal voice, he did a great job. And working with the family, it’s awesome. With my kids, now they’re big enough to work in the studio, be ready and “Revengeance” is a great song we play every night and the crowd really likes it.

Is there anyone with whom you’d like collaborating with in the future?

M : Yeah there’s lot of people. I’m a big fan of the thrash movement; there are a lot of guys still going on, like Celtic Frost, Tom Warrior of Triptykon, Mille from Kreator, Schmier from Destruction. If it’s possible, one day, I’d love working with them.

You’re celebrating the 15th anniversary of Soulfly, your career began in 1984 with Sepultura. So you saw all the evolution around music and music industry, what’s your feeling when you look back to those golden years for heavy metal music?

M : It’s great, it was fun. I like to think that’s good now too, the moment is also good. So I don’t live on the past, like those guys who only talk about the past. I think the present is very exciting, I’m living exciting moments, Soulfly is also an exciting band. It was a lot of work to make Soulfly popular. Gloria takes care of the Facebook page, we got messages from Thailand, Iran, Singapore, it’s amazing to see the music travelling around the world.

What’s your relation with social networks? Do you sometimes take the time, answering fans or posting and messages?

M : Yeah, I do it with her. I comment, receive messages from old friends. Also in America, I go online and reply during Q&A or press conferences, for an hour or two. It’s really fun to interact with your fans. I myself don’t have a Facebook, I prefer not having one, I don’t even have a cell phone. I’m more like primitive.

You’re going to release an autobiography, like more and more people in the music industry. What is like describing your whole life in a book?

M : It’s been a lot of work. Thousand, billions of interviews, going back to the beginning. It was fun going back to my childhood and remember everything from the Brazilian days, growing up in Brazil, creating Sepultura and all the sacrifices I made for Sepultura, creating Soulfly and Cavalera Conspiracy. All that’s going to be in the book, I think it’ll be great, with really cool stories while my life is full of those. There’s a great introduction made by Dave Grohl and “Roots” (1996) blowing up his $15.000 speakers, he got for Foo Fighters. He put “Roots” on and the record blew up the brand new speakers. I loved it when he told it for the introduction of the book. It’s coming next year.

Many festivals are announcing some bands for next year’s editions; you’ve been to Hellfest many times, what’s your opinion about our French festival?

M : It’s great. I remember Hellfest when it wasn’t so big, more hardcore. It has grown a lot, just like many other European festivals like Gods Of Metal. I played Gods Of Metal when it was very small; this year was huge with Ozzy, Guns N’Roses and all those huge bands. I love European festivals you know, I love the Hellfest festival, if I can be a part of it, whatever the band, as long as I’m on it! (laugh)

So maybe you’ll be at Hellfest next year?

The next football World Cup will be in Brazil. Would you take part for the opening ceremony if they ask you to?

M : Of course! That’ll be fun. My brother is actually connected with the football people in Brazil. He knows club presidents and …mafia! Brazilian mafia, so maybe he can work something out ! (laugh) I leave it up to him.

Before ending the interview, our entity is named “RockYourLife!”, so basically and as a tradition at each interview, what rocks yours?

M : What rocks my life? Metal, of course. Music in general, I love the fans’ energy, something that money cannot buy it. You can be a billionaire but you can’t buy this, which has been created with all those years of integrity and friendship between you and your fans, it’s amazing. That’s why I mostly like being in a band, the interaction with the fans.

Any message to the French fans?

M : Thank you, great to see everybody and tonight is going to be a great show and can’t wait to come back!