Skunk Anansie doesn’t need to be introduced anymore. Skin and Ace were back in Paris to promote their new album “Black Traffic”. We had the great opportunity to spend a bit of time with them for a little interview and a photoshoot!

Hey, could you introduce yourself to start with?

A : I’m good actually! It’s been a long couple of days but being in a band is always very inspiring then I’m actually quiet happy.

You’re here to present your new album “Black trafic”. Why did you choose that name?

You’ve actually always been a engaged band haven’t you?

A : A kind of. As a band we’re socially politicaly aware so we tent to observe what’s going on around and right few songs about it but we don’t preach to people, we don’t say “smash the state and bring down the government” but we do kind of say “hang on a minute, this is happening and that is happening, we don’t have to fix it all but this is what we see”. We don’t say to people what to do but we say what we see.

Have you got a favourite song in this new album?

A : It changes a lot you know. I really like, for a heavy track, “Sticky Fingers” because it’s just mad, it’s a mad and heavy song. It’s really fun and cool to play. A soft song I would definitely say “Hero”. Hope you’ll get to hear “Hero”, because it’s a classic sound in song. When I was younger I always thought “I’d love to write one of those songs that’s really classic”. I remember listening to U2 when they did “One”, I was “Oh god, I wish I would have written that song”. And I think that with “Hero” it’s one of those song that I’m very proud of, I think it’s good classic song.

This album is your first independant release. Why did you do that choice?

A : To be honest, we weren’t forced to go on our own label but it was a logical thing to do at this times of record business. You don’t need office and staff as you used too. To be honest, we always done what we wanted to do, whatever we’ve done a record, we’ve made the record we wanted to make, released singles we wanted to and done the same with tours. It doesn’t feel any different to what we do creatively, it doesn’t go like “OK, you can do whatever you want creatively”, the different is does make is that we are in kind of control of our destiny a little bit more so if we thing certain things work or don’t work we can follow those routes. We’re like “We’ve done this before, it cost a lot of money, we won’t do that on our label” or “We did this before and we found we should’ve done thèse things, we’ll do that on our label” but musically, we’re still the same.

How was the recording process?

A : The recording was briliant. I think it’s the most harmonic recording we’ve ever made as a band. We just went for eight weeks, five days a week, twelve hours a day, solid. It was really experimental, really inventing. We’ve never recorded that way. Normally, we had the record, we’ve rehearsed it, we’ve got it all in our mind, even the sounds. We’re going like doing all the drums tracks then all the bass ones or playing it live together and all. This one we just went in with a shell, each song was just literally a four piece band playing in a room on an iPhone. This time, we decided to create the album song by song so we set up and did the first song, and after that did the second song and so on. Every song was recorded separately that’s why as an album there is so many different sides to it, you’ve got some soft songs, heavy songs. But then, what happened after that, after recording it all we just sat and thought like “we’re going to put some loop there, some electronic sound there…”, we’ve kind of re-worked it in a way. We call it “flavour”, we say “That’s a new flavour”. Every song was created individually and it was “flavoured”.

You choosed Chris Sheldon (Foo Fighters, Pixies..) as producer. Can you explain us that choice?

A : To be honest it was a co-production with Chris. We like Chris because he always go with us in idea that we like. He’s fantastic in catching what we need so we say “we want this like that” and he was “yes, so let’s do it!”. We came with melodies and structures and he put it in the machine for us, it was a very good collaboration.

Regarding the way music industry is going, you said that was a “positive chance for you to re invent the way to work and take control of your art”. Can you explain us a bit about that?

About re-inventing, on your third album you’ve already put some electronic sound. Didn’t you feel being a kind of “avant-garde”?

A : To be honest, everyone has their things. I couldn’t say we were innovators or anything in electronic music because we are essentially a rock band but we’re influenced by a lot of those things so we but those elements in our music. When you listen to this album now, it sounds still quiet modern. The remaster of it sounds amazing like they were done last week. I suppose in a way, yes we were ahead of our time but, at the time we were just very contempory. This is a thing with Skunk, I think we’re very good in creating those records that are right now, this new album is now, it’s modern, it’s contempory but in ten years time it won’t sound dated, of this time.

“Black Traffic” is your sixth album. Nearly twenty years after your first one, nothing left to proove really. After all these years, where do you found your inspiration and your energy to keep composing new stuff?

A : It’s the same that when you find it. When you listen to a new album and you love it, it’s exactly the same for us. We play new music, we love it. It’s totally energising. It’s what music does to people. Doesn’t mind how old you are, music will always make you feel good. And if you’re trying to do something energising, new, modern, it’s totally inspiring and it’s a fantastic way to live.

It’s actually not the same because you’re acting in all that. And now you haven’t got anything left to proove after all this time then…

You’re mostly considered as a punk rock band. What do you think’s left in punk rock and punk in general in 2012?

A : I suppose, if you think of essence of punk rock which is something revolutionary would be this new murge of rock and dubstep. It’s quiet in your face, it’s angry, it’s noisy… Some people don’t like it. Punk music is something happening now. Punk could be anything actually.

What place do you give to live music?

A : For us, it’s like a 100%. I think it’s what we really are, a live band. I think most bands are really live bands. Recording is on the side of us. That’s what we really enjoy, being there, physically playing, it’s the most fun being in a band. Even if we enjoy being in the studio but if I could stay three months in the studio or I could be three months on tour, I’d surely choose to be on tour! It’s fantastic playing live with this band.

You had a really tragic experience last year playing Pukkelpop…

A : Yes, it was just mad. Storm on the stage, got dark. Everybody was getting crazy because they were all wet and the music was getting heavier and all. We thought we could go through this, it was just a storm, we’ve played in the rain before and in twenty seconds it changed. All the trees fell down, we had to run off the stage for our lives, it was crazy. After we heard that the festival shut down and all, it was really mad. In a way, we were very lucky our stage and the people around our stage were OK as well then, it was the good bit of the news.

Our webzine is called “RockYourLife!”. What rocks your life?

A : I really enjoy to walking down the street with my earphones on listen to compilations and cool music, that’s what rocks my life! Especially Alter Bridge! 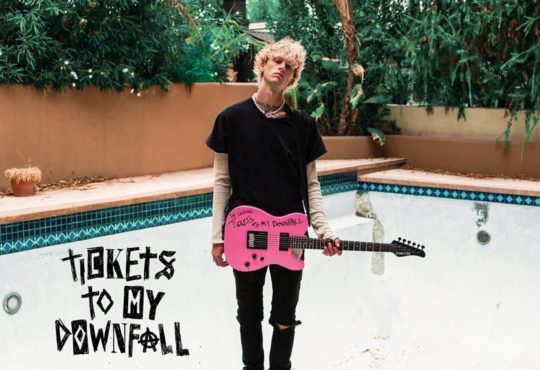