We met Leigh Kakaty, singer of the American band Pop Evil, to talk about their new recruit Hayley Cramer. A rich maintenance in confession and in good spirits.

You’re actually in tour 3 Doors Down and Red Sun Rising. You started with Germany, yesterday in Hamburg. Why any stop in France? Everyone is so disappointed.

Leigh Kakaty (vocals): Yeah, I know, it’s a 3DD question, I don’t know why. For me, when we get on tour in Europe, I’m always looking for two dates: of course Paris and London ’cause tha’s my two favourite cities, so hopefully we are coming back to Download Festival France, we are working one. So I think we gonna come over here, we gonna do Download UK as well, and I don’t know, we don’t even know yet but I will tell you all the secrets ’cause that’s what singer do. So that is the plan roughly, I hope we gonna do maybe 4 or 5 gigs next summer and made the new record. Hopefully, get back over here with another tour and get the French more, that’s the rough plan, but I don’t know why it was left off.

Maybe because of poor ticket sales in France?

Leigh: I don’t know. I understand. Even still, for me, we did a headline show and there’re still 200 people going on. For Pop Evil, we are not afraid, I mean we play for hundreds, we play for thousands. It doesn’t matter. But I understand.

You toured with Disturbed and Rob Zombie, such great amazing bands. How was it?

Leigh: To tour with Rob Zombie and Disturbed? Unreal! It was two of my favourite tours ever, Van Andel Arena.

One of the biggest place in Michigan!

Leigh: Yes! Our hometown, we did our hometown arena, it’s a big deal. It was a dream, absolutely. All family came out, too many families came out to be honest, and we couldn’t see everybody. Get a chance to perform with Disturbed on stage a couple of times. Rob Zombie, of course. Incredible. It was our first tour with our new drummer Hayley. She did great. She is amazing.

Your life is about touring, how do you feel about that? In a recent interview you complained a little bit about that.

Leigh: I don’t know if I complained, I mean I love my love, I love touring, it’s just… It’s vigorous, it’s challenging. It’s not always easy to tour as much. But if you’re a new band, but we’re not technically new ’cause we are around for 10 years, but for 10 years, people still don’t know who we are so we are new to somebody now so it’s important. It’s hard, but to do it you have to play live, people have to see you, and you have to stay on the road, away from your loves ones, your family. Basically put your family number 2 and your fans number 1. But if you want to break your band, especially in your home country, you need to tour a lot and we certainly done that, and now we’re getting to the point where we need to start thinking about growing our band in other countries so we don’t over saturate the markets. We gonna play too much, people won’t come out. So Canada has definitely grown this album cycle, Canada was stuffed as well and I’m Canadian so it always frustrated me earlier we could not get the band bigger in Canada, but finally it’s starting to resonate because we’re playing there more and we understand we have to do that in Europe as well. But we don’t have a major label so it’s not always easy, we have to find out everything ourselves so we’re trying to do everything by their own to keep coming back. Even if we can’t make every country, we try to focus on Germany, UK and of course Paris in France. 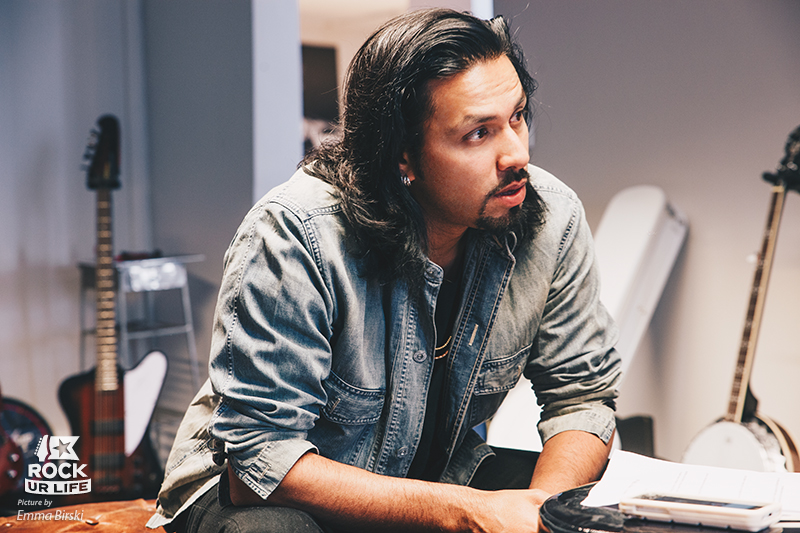 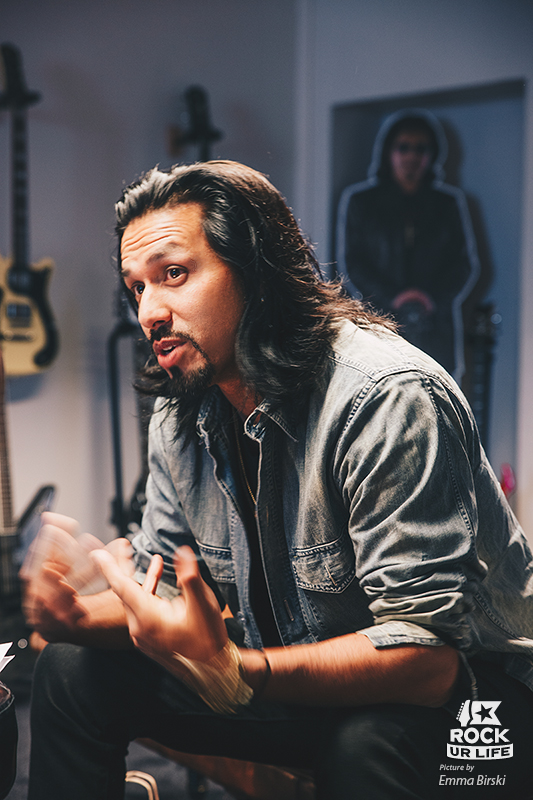 Let’s speak about “Up”. It’s really a big success, we found this album more positive, freer than “Onyx”, more romantic and melancholic.

Leigh: I didn’t really have an inspiration, I didn’t write anything in advance. I wanted to go to a fresh place, “Onyx” was very dark, a little depressing in a way ’cause I was angry. I’ve lost my father in 2011, so I didn’t know how to deal with it so I done with it in a way I know, through music. A lot of angry there, a lot of sadness. When I got ready to write “Up”, I just still wanted to be sad anymore, I wanted to help people, I didn’t want to be so selfish, it’s not about me, it’s our biggest record to date, I thought it was important to me to stop thinking about myself and think about the great fans we have and the great fans we’re starting to have right here in Europe, think about how I can inspire them, I needed to inspire myself first: I went to LA, it was sunny, road for steps, and my life changed, I started to realise I wanted to have fun again, and I got it into music to have fun again, not to be angry. Rock n’roll is fun. Once “Footsteps” were written, we just knew that song was special and we just knew that the rest of this album gonna kind of go in that direction and we knew the only thing to call was “Up” ’cause that’s where we tried to go. We gonna look out that album from a glass half-full rather than a glass half-empty approach. Again, that same expression is kind related to rock, in the States, everyone says rock n’roll is dead. A lot of depressing stuff. And I’m like when your all life involves around rock and metal, when people says those things, it’s depressing, so, about we look at this, for the fact that, we never got into making money, we got into play shows and play music, two hundred a year, we’re doing what we love, making music for all the people. I think that positive mentality lets us being more comfortable with who we are. So that’s our best work yet and this is certainly being our must successful work for me personally ’cause I feel the best.

“Up” was released two years ago, is the new album arriving soon?

Are you writing it on tour?

Leigh: Honestly, I’m personally writing anything but the other band members are writing some stuff now. (laughs) There’re no rules you, if anyone has any riffs they can put it on the table. The best will win, but I will start writing myself when the tour is done.

So about Hayley Cramer, tell us a little bit about her. How has she been recruited for Pop Evil?

Leigh: Our last drummer Chachi wanted to kind go to a different direction, he had some other things he wanted to do now. I mean, we understand, this job is hard, it’s a big sacrifice to our family, so he wanted to spend more time with and we respect that. He did the right way: he gave us enough time and we always talked about we wanted a female drummer cause we have a large female audience. She comes from England, she was playing in some bands. She came from a good source, she made a demo video. She did a great job. She played five different songs in one so it gave us an idea of what she could do. But then we have to live with a girl! (laughs)

Yeah, how did you feel?

Leigh: They’re been a lot of rules! No girls on the bus! No girlfriend. Nothing of that, whatever, for parties. But it was interesting, we are a different band, she came at the right time. There’re no party anymore, pretty boring about that, we want to be the best, and we want to be healthy. We play more shows too, so we got to take care of ourselves. So she came at the right time, she crushes the drums.  Amazing drummer and she became like a sister already.

So now you’re living with a girl in the tour bus! (laughs)

Leigh: We don’t even see the difference! She’s great, she is like a little sister. Glad we have her.

And she has a lot of success with your fans! We can see it on social medias.

Leigh: Yes, they already call her the Queen. (laughs) She’s incredible. So we’re excited, we can’t wait to start our next album with her, it’s fresh for her, and it’s fresh for us. It’s a Hayley air. (laughs)

She’s living in England right now. Is she thinking about living in the US?

Leigh: I didn’t even ask her, but she actually lives in the US ’cause we’re on tour some much in the US. I don’t think so but who knows. We’ll try to corrupt her like “you need a house in the States, come on!”. 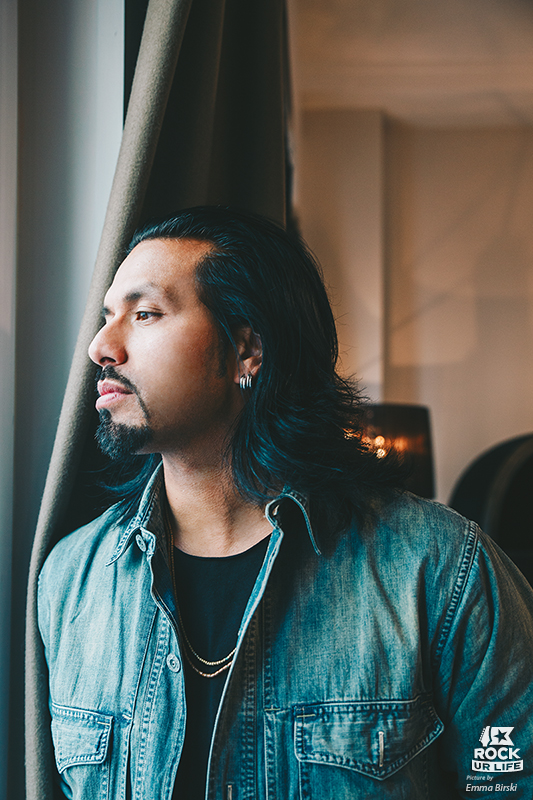 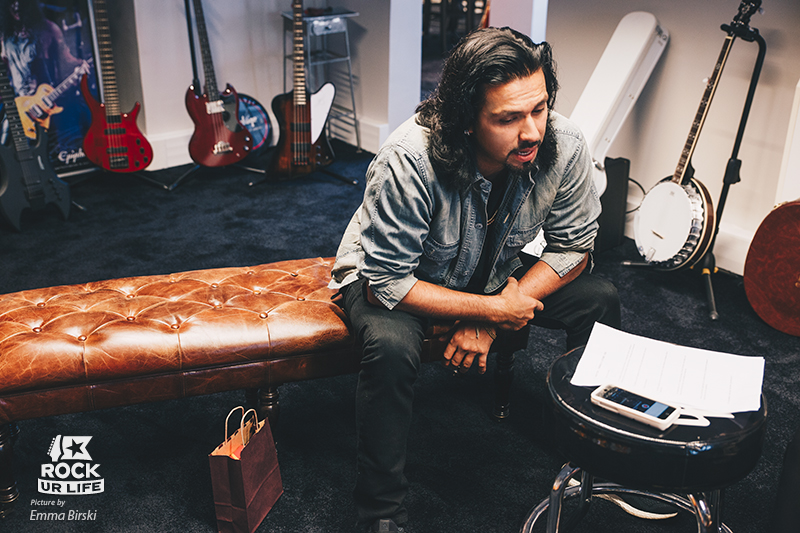 It’s been two years since your last show in Paris. Last year you opened for Limp Bizkit in Lyon. When will you come again?

Leigh: We will try to come on the early summer, hopefully to do the festivals.

So six months to go!

Leigh: Yeah, I know. The thing is, we gonna tour for the end of this album so we gonna do one more big US tour in January-February so in March it gonna be done. And then, do another album. So we can start Europe with fresh materials and get everyone on the same page with the new music.

It’s gonna be your first French festival ever. Is Download Festival France confirmed?

Leigh: As far as I know, it’s in the works. Again, things change so fast in this business so we don’t know. But that’s the plan to do Download, to do our first festival. I’ve heard from you and so many other French journalists how great they are! I really need to experience it so hopefully we get our chance to do it. We care a lot of our French fans, especially our new French fans. You guys, do matter, we do love you. We appreciate y’all. We’ll try to get them the chance to see us play.

That was your birthday some months ago, what could we wish to you for this new decade?

Leigh: I hate birthdays, I get older! It’s sad right. I mean, we get a little worried: one more year on the bill. But hope we just keep growing, we can experience here in Europe, get the opportunity to do festivals. Keep growing in the States as well. It’s important we got more work to do, over in the US. In this business, you don’t really worry about the future ’cause it doesn’t really matter so I don’t really think about the future now. I just worry about today, be sure that we get back here, I wanna play in Paris, and hopefully I get enough day in Paris, a lot of city I wanna see. I wanna see things with French perspective ’cause I’m always here like an American. So I need to do a good shop.

Let’s finish with this question: as our website is called “RockUrLife”, what rocks your life?

Leigh: Oh my god, rocking my life are everything. It’s breakfast, lunch and dinner. (laughs) It’s my heart and soul, It’s Pop, it’s Evil. It’s singing. It gets me up in the morning. I can talk about what rock means to me. Rock is kind of a rebellion, rock symbolizes everything. Be able to be independent: play my songs, play songs I wrote, it’s a powerful thing so I don’t think I can say one thing. Rock means everything to me. 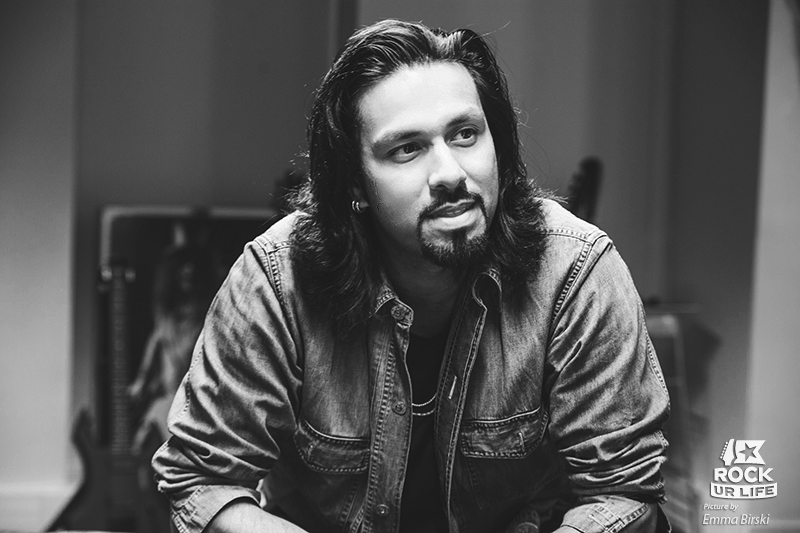 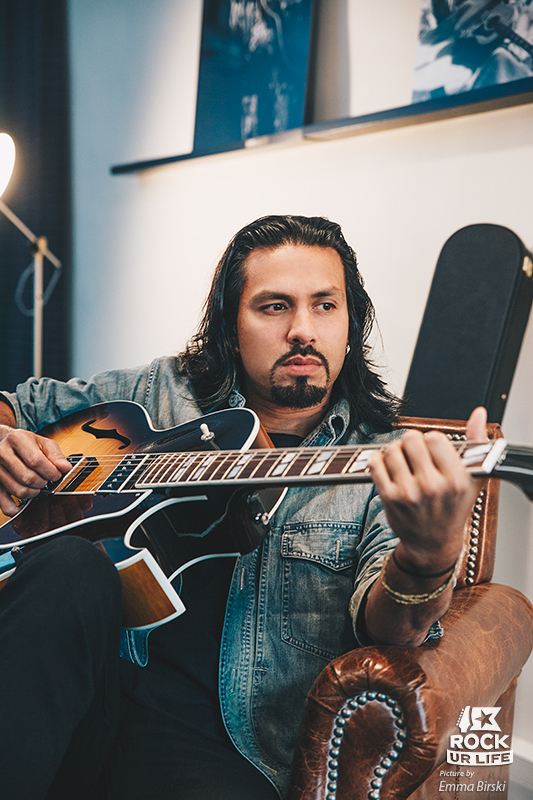 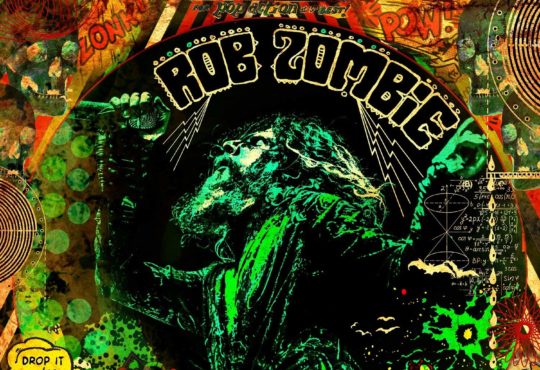 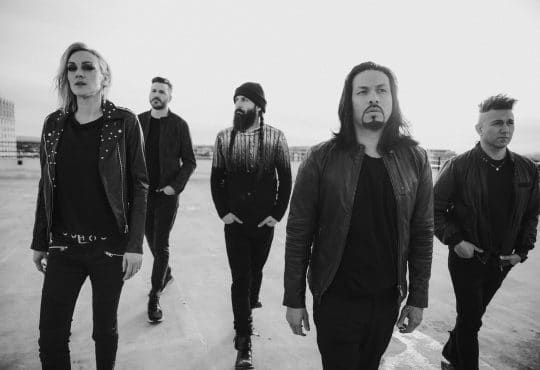 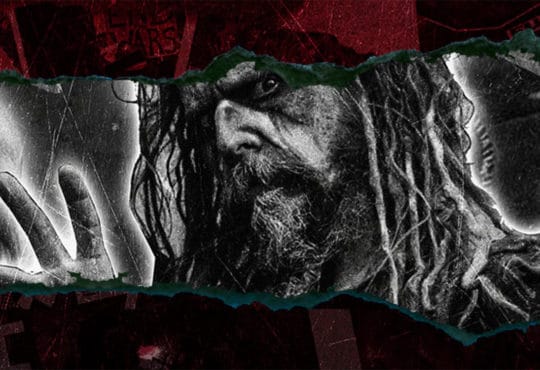 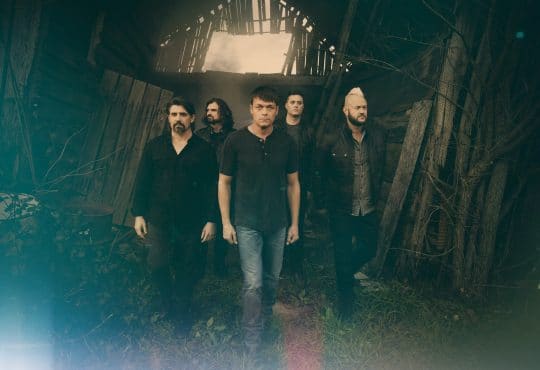 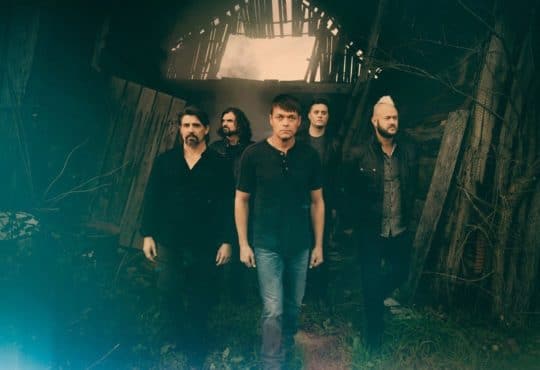 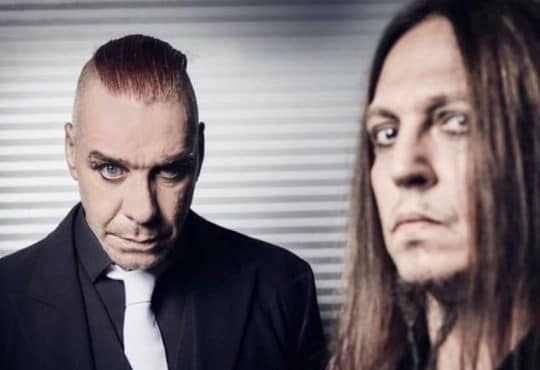