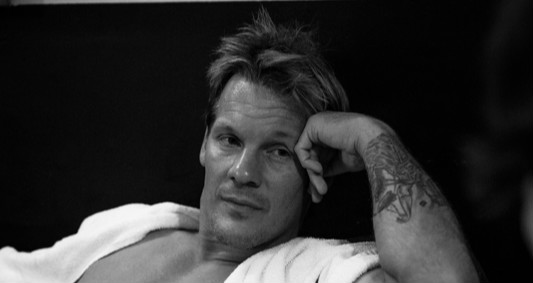 A few months after the SOiL tour and the Trabendo’s gig, Fozzy and his famous frontman, Chris Jericho, are back in Paris, and this time with Drowning Pool. RYL! got the  pleasure to meet and chat with Mr Jericho! Check it out.

Hello Chris! How are you?

Chris Jericho (vocals) : Good! How are you?

Fine, thanks. Back in Paris, after the SOiL tour, still in good shape after your short WWE run?

So your last record “Sin And Bones” was released last year, how do you feel about it right now? Playing it live, seeing the audience’s reaction.

C : We put a lot of time in “Sin And Bones” to get it exactly the way we wanted it and we really wanted to have the next step in what Fozzy was doing, kind of decided on the record before “Chasing The Grail”, that what we do best is very heavy and the music has very melodic choruses, like if Metallica and Journey had a bastard child, it’ll be Fozzy. So we started doing “Sin And Bones”, we really wanted, focusing in getting that next level. We spent time on getting it right, no rush. When we released it, the reviews were off the charts, the best reviews we ever had, high selling records we ever had; and playing the songs live, we do 70% of the record and all of them go really really well. And that just shows that people know the material, like the material and I think it’s one of the reasons why we’re able to continue growing to the next level.

There’s one track that kept our attention, “Storm The Beaches”, because of its length and its construction. Was it supposed to be such an “epic” track?

C : Yeah, we did a long song on “Chasing The Grail” called “Wormwood” and I wanted to do another one on this record. I just had this idea, I was writing my lyrics based on song titles and “Storm The Beaches” sounded like a pretty cool idea to me and I just went on Google and I found this letter that a kid who’d survived to D-Days, one of the soldiers, and it was very descriptive and I just started reading the letter and writing lyrics based around that. Next thing I know, I got eight pages of stuff, so it was kind of the perfect subject to do a long song about. 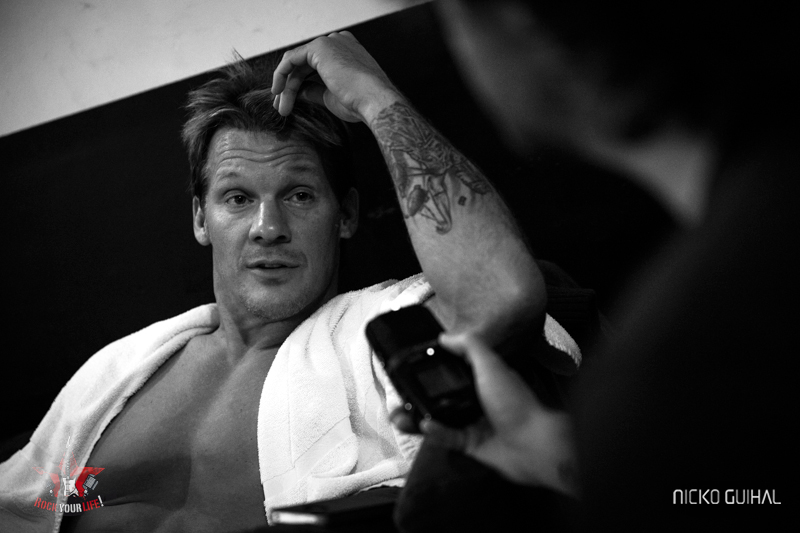 Did you ever try to play it live?

C : No, this is one that we haven’t played yet. My overall goal, you know, in a while, when we continue to grow, is to do a special show, maybe one in London, one in Paris, one in Germany and do the whole album “Sin And Bones”, from start to finish; that’s kind of my dream. We’re almost there.

What are the differences between making this album comparing to the previous ones? What did change in your writing process?

C : Not really, I mean, on “Grail”, I wrote the lyrics first and then pass them over to Rich and Rich had some ideas and he can use my lyrics to influence, combine with his etc. It really worked for us so we did the same on “Sin And Bones” too, but there’s also a lot of contribution from the other guys. That was the first record we felt as a band effort rather than just a Rich Ward and Chris effort. I think it’s the reason, once again, that it goes so well.

Did you ever imagine signing with such huge label as Century Media, when you began making music?

C : I can’t say I imagined it but when we started Fozzy, and especially in 2009, starting to do the band full time, we wanted to be the biggest band in the world. You can’t be in this business if you don’t feel that way. So Century Media was the perfect fit for us, it was just like I said the next step with a major label, and it’s been great so far.

There were hints about a DVD coming up, with your signature with them. Is that project still on?

C : Yeah it’s still on. We’re working on it. We wanted to be right, when you release your first DVD, is has to be right so. We got a lot of footage in the can and I think, we just kind of wait for that special gig to really focus on. I think you’ll be seeing it quickly. 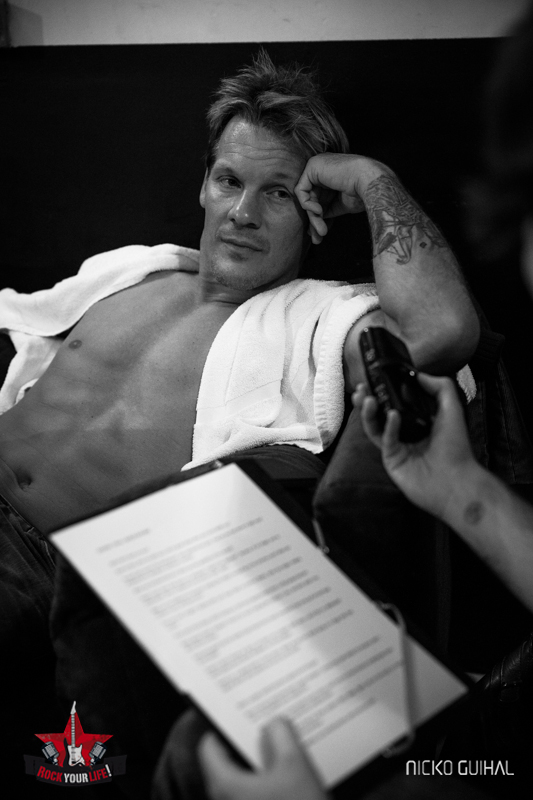 What about Fozzy’s projects? There’ll be more touring this summer I saw, and then what’s the plan? More touring?

C : This business, there are always balls up in the air. We might be doing in September in the States, we might come back to the UK and maybe Europe in November/December, definitely coming back in August and once that tour is done, if there’s no others offers that work for us, so we’ll just start working on the next record; we already started working on it.

You’ll once again host the Golden Gods Award next month, how does it feel to be part of such huge music family?

C : It’s great, ‘cause it’ll be the fourth time I’ll host the show and we’re seeing the growing lips and bounds that this year Metallica is headlining, our little award show has become kind of a worldwide phenomenon. Heavy metal deserves it. You know, there’s a hip hop award show, a country award show, why wouldn’t there be a heavy metal award show? Once focusing on it, everybody realize it’s the place to be and that’s what you see. Ozzy there, Metallica there, Alice Cooper… name somebody. I bet you Iron Maiden will be there soon, next year; maybe Judas Priest; the big ones that haven’t been there yet, they’re gonna match on, I’m sure.

There’re many friends of yours, are there any rockstar with whom you’d like to collaborate?  Guests appearances like Mr. Shadows on the last album.

C : Shadows and Phil Campbell yep. There’s a lot of guy with whom I’d like to work but it depends on what our songs need. That’s why Phil is perfect for “She’s My Addiction”, that’s kind of a Motörhead vibe. Shadows’ really helped on “Sandpaper”, ‘cause I thought he’d be perfect for it and he did. So you know we’re starting writing the next album, if I feel like that Slash could be great to do a solo here. Every Fozzy got some kind of guest, star on it. So I don’t see the reason to change things.

So you’re not like “I want to collaborate with that guy, so I’ll make a track for him”

C : No, this is our band. If we put together something that we think someone would be great on, then we’ll ask him to help. 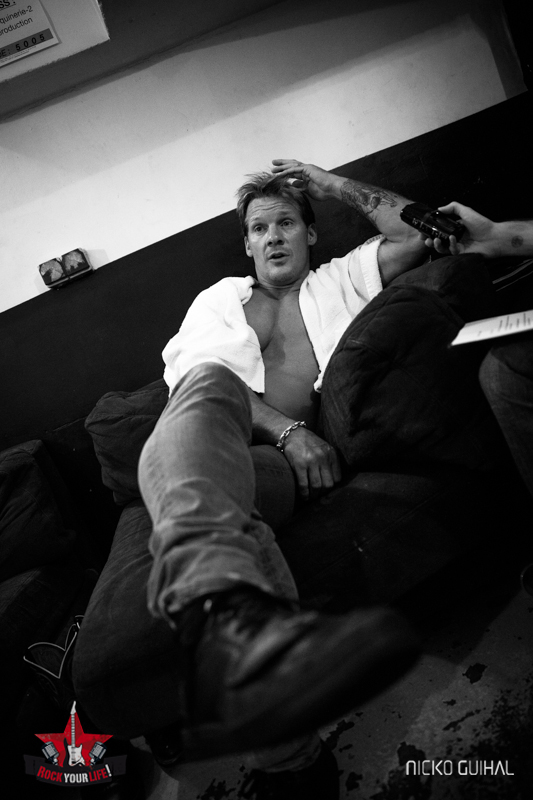 There’ll be a special prize to Tony Iommi. What do you feel about being on a stage with that legend?

C : I’m not sure if he’ll be there, because he’ll be on tour. But Geezer has been there before, Ozzy too. You see a lot of legends when you’re there, Gene Simmons too. You know I’m the host of the show, not a fan boy and most of those guys there, I know and the ones that I don’t know, we know of each other and become friends pretty quickly.

Do you think that at some point of your career, you’ll have to choose between wrestling and music full time? Or being a part timer conciliates both.

C : Not really, we’ve been doing Fozzy full time since 2009 and everything I do is based around Fozzy’s schedule. I don’t really wrestle much anymore, just if I have a couple of months off, here and there, between Fozzy tours, I’ll go back. But, you know when I was a kid, I wanted to be in a rock band and be a wrestler, those were my two dreams. Wrestling is great, I love it but now Fozzy is the priority, you can see it with the tour we’re doing, so it’ll kind of stay that way.

Finally, as a tradition, we are “RockYourLife!”, what rocks your life?

C : Going on the road and doing what I love to do, always doing what I dreamt to do when I was a kid, and never take it for guaranty, it’s the best job in the world and we’re very fortunate to do that and come over to Paris and play great shows in front of hundreds of great fans, nothing to complain about! 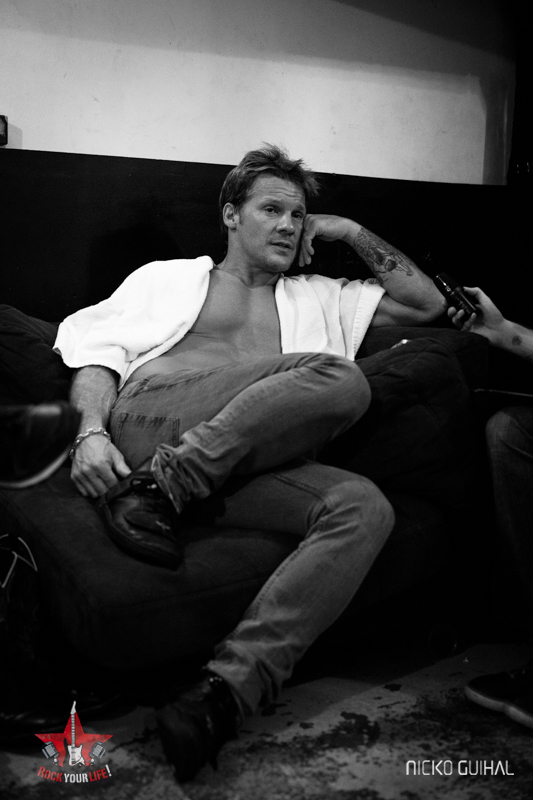