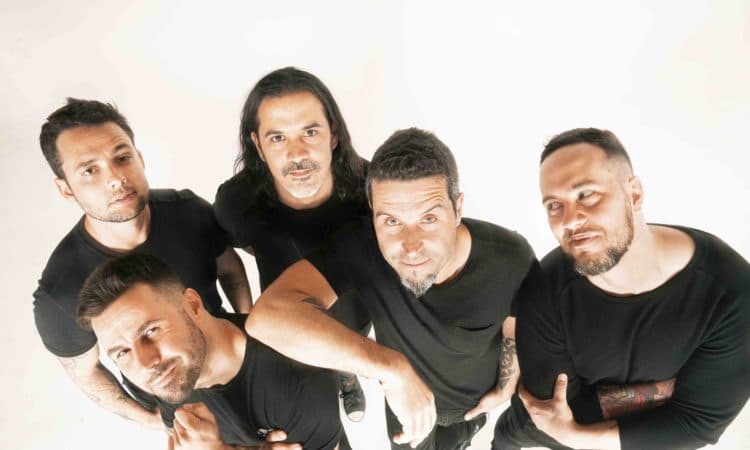 On the occasion of the release of their second album, we spoke with Theo van der Loo and Jonathan Dörr from Ego Kill Talent. Originally scheduled to go out on a tour with Metallica, the two band members reflected on the world situation, the changes to the album’s release and their band life.

Theo: Jonathan will join us! He’s a little late, it’s our first interview of the day, we’ve got 15 in a row!

So long day! Courage to you two.

Theo: Thank you! Yes I am warning you, I have known Jonathan for many years, he must be late because he must be brewing his coffee or in the shower or just late! (laughs)

Theo: If I had to bet, I would say coffee! A huge mug to hold at least 5 interviews. (laughs) Singers are always the problem! I suggest we start, he’ll join us along the way if that’s okay with you.

Yes of course! Let’s go. Let’s start with simple: how are you?

Theo: That’s fine, first interview out of sixteen, which is good, because we have to talk about this album! So I’m fine, I just have one regret that I can’t be on tour now.

This next question, we end up asking as much as our last. Can you tell us how COVID-19 has impacted your life?

Theo: It’s a crazy situation, at first we, and when I say “we”, I’m talking about the world. We did not realize the extent of this situation and each time we reviewed our expectations later, first 6 months, then a year. And today we are just unable to project ourselves. And now the infections keep increasing and we get to know more and more someone who has died from COVID, or someone we know. And when that happened to me, that’s when I realized: “Damn this thing is real and it’s very bad.” So I did my best to maintain good mental health and those around me. We also focused a lot more on releasing the album, because right now we should be touring with Metallica to promote its release. And when it was all canceled, we completely rethought the album’s release and promotion strategy. And again, we are lucky, other people go completely crazy with this situation and lose everything without any prospect. That was a long answer to your question, but it at least allowed Jonathan to join us! (laughs)

Jonathan Dörr (vocals): (in French) Hi! How are you?

Theo: I said you were most likely making yourself some coffee!

Jonathan: I have to! (laughs), but mostly I had connection problems, the network is not very good where I am.

More general question, and maybe different for you two. A month away from the release of new album “The Dance Between Extremes” and with the way it’s been built, how are you feeling? We already know a good part of it and the feedback is quite positive. It’s reassuring.

Theo: I suggest that Jonathan answers, he hasn’t answered anything yet. (laughs)

Jonathan: No go ahead, you seem more comfortable!

Theo: We’re obviously very excited, as I told you earlier we’ve been working on this album for so long that we’re approaching two years! Between its writing, the recording in Los Angeles, the pandemic and the initial release, we’ve been waiting for so long! But that’s it, the baby will finally be born. We’re very happy with the responses we’re getting so far, but we’re only thinking about going on tour. We think about it every day! So now we can’t wait to be on tour.

And without the tours, and the album that took a long time to come out, how did you stay in touch with the fans?

Jonathan: We mainly used social media, that was the base for us, we tried to post content every day to keep our fans alert. I don’t know if Theo told you when I was away, but we also recorded several shows called “live streams” to broadcast them. These lives were really the closest we got to our fans to replace touring. At the same time we set up a newsletter that we sent out as soon as something new happened on our side. Social media has really been our best tool for this.

A lot of musicians are starting to think that these livestreams could be the norm for a while. Can you imagine? Is that something you would accept?

Theo: As we have already done, obviously that doesn’t “bother” us. It had gone very well, there were thousands of people logged in and there was an aspect of relaxation and escape during these uncertain times. We did 6 or 7 during the year and it’s a good way in my opinion to keep the flame burning, but it will never replace the feeling of being on stage, of connecting in the eyes of the fans, of feeling their energy. So it’s always better than nothing. But when it all picks up again, I think it will be an amazing experience for everyone, the bands and the audience!

The album in its construction and its release is not trivial. It has been a kind of puzzle over time, but why this choice and this way of doing things? And has the pandemic played on the format?

Theo: We already recorded before the pandemic!

Jonathan: Yeah we finished the album in 2019, all writing and recording long before the pandemic.

Theo: Besides, a lot of people think that the name of the album came about because of the pandemic, but we had it before.

Theo: Yes… a little! But everything you hear on the album was done before this situation. We worked hard for this album. He changed everyone in the group. This is our second album after a world tour, we all lived together in L.A in a house for over three months, it was an interesting experience to record this album.

But with the pandemic and the release of this album, are you taking a creative break or are you already moving forward on new music?

Jonathan: We keep writing! New music and at the same time we take the time to understand this second album. We haven’t had a chance to play it live in front of the fans yet. It’s a really strange feeling, because we wanted to play it live for its release and at the same time there is a need to move forward and therefore to create new things, without having any feedback on what we already have made.

The good thing about this album is that you can find a bit of everything from Aerosmith to Black Sabbath to Guns N’ Roses. These bands definitely had an influence on your music, but isn’t it a bit painful to be compared to these bands? Are you often called “new this, new that” or are you, on the contrary, happy with these comparisons?

Jonathan: No, on the contrary! I find it super cool. When I am told that the music we make sounds like Aerosmith or Black Sabbath, that’s great. You know these bands are our heroes, we love to listen to their music and they inspire us in what we create. Of course we try to create our own path, our own style, our own way of writing songs. But it’s impossible to stay away from bands that you love. As long as it’s not recycling! (laughs)

Theo: And you know what’s crazy too, that when we write a song we never try to say to ourselves: “OK, let’s do like this band, or like this music”. We write and then we say: “Hey! your music reminds me of this or that “and it’s amazing. You mentioned Aerosmith earlier, you’re the first journalist to compare us to them! But we love Aerosmith and when we are on tour we listen to it a lot. There are stickers in the van, on our equipment! (laughs) And thanks for comparing us to them, it’s a great band!

It’s certain! But do you perhaps take a little inspiration from the stories told in these songs? The same themes come up often and are similar from one group to another. Where did you have a specific goal and a story to tell in this album? There is a premonitory side of the pandemic in some texts.

Jonathan: We always write something biographical, but at the same time we talk about a lot of things in the band like philosophy, alien stuff too. (laughs) We like that kind of thing we then do a digest of all of that and we share it with our fans. The biographical part is usually about: “how to solve our problems”. In a sense, we are writing for ourselves, in order to find a way to be free from our pain.

Theo: And I have the impression that inside we all have some of the same problems, our inner peace. Human beings have problems, they suffer, they are anxious, they have fears. We all go through the same feelings. So even when you write about something very personal, it becomes personal for a lot of people as well. What sets us apart from one human to another is very superficial.

Yes it is certain! So if I understand you correctly, everyone in the band is working on the lyrics?

Theo: Yes! It’s a very dynamic process. Most of the time it’s Jonathan and I, but always about things that concern the band and that we all talk about together. One thing I think we do well in this band (and we’ve all had other bands before) is that whatever happens, whether it’s the music or the lyrics, nothing would happen if the five members weren’t involved and if it didn’t affect all of us. We are a whole, even if I write a text from A to Z it only works if the others feel touched by it.

It’s great how it works! Is it the same visually? For example the cover is very “Quentin Tarantino” and his cowboy movies. Red, which jumps in the face. How is it decided?

Jonathan: Again, this is a decision we all make, we participate in the reflection together. For my part, I wanted something honest. A cover with the name of the band, which corresponds to it at the same time and which can be seen from a distance. On the other hand sorry I’m losing my words I need coffee. (laughs)

Ah! So do you speak French?

Jonathan (in French): Yes, I understand and I can talk it a little bit, but not well!

It’s already very good! To get back to the resemblance to legendary bands a bit, how can you convince people to take the “Ego Kill Talent” train? How do you get them to listen to you?

Theo: That’s a great question. I think Jonathan has the answer!

Jonathan: I don’t know. It’s true that’s a good question, but I think Kilien has the answer. (laughs)

It’s up to you to convince me instead. I am not a member of the band yet!

Theo: I would say that if you put in a blender bands like Sepultura, Gojira, Aerosmith, Lenny Kravitz, Metallica, Faith No More and you mix with a lot of sincerity and passion, you get Ego Kill Talent. So if that doesn’t convince you, I can’t help you. (laughs)

Last question: as our website is called “RockUrLife” what rocks your life?

Theo: Rock n’roll for sure!

Jonathan: And be on stage!

Theo: Yes, being on stage!

Thank you so much! See you soon on stage in this case.

Jonathan: Thanks to you! 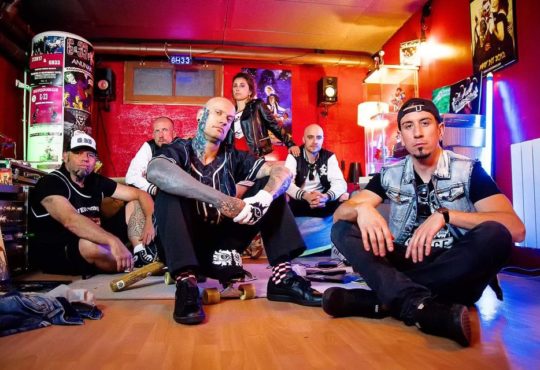 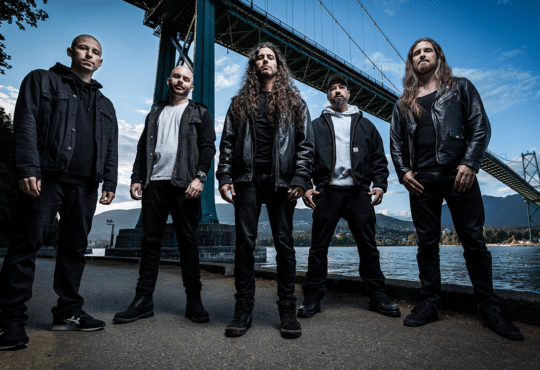 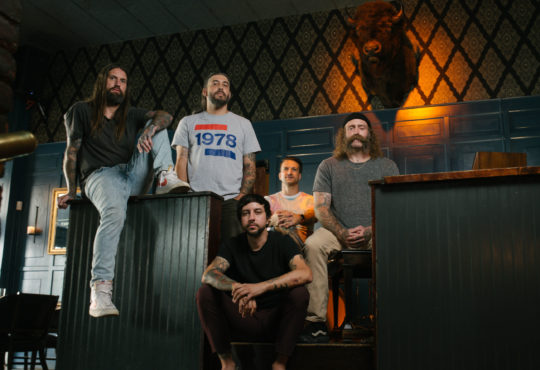